The Symbol of Faith (Nicene Creed) 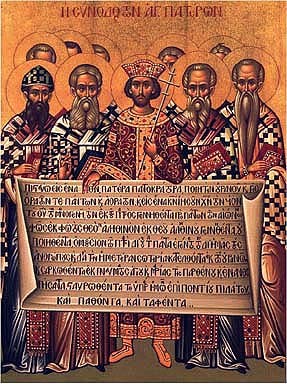 I BELIEVE in one God— All: THE Father Almighty, | Maker of heaven and earth, | and of all things | visible and invisible. AND in one Lord, Jesus Christ, | the Son of God; | the Only-begotten, begotten of the Father before all ages; | Light of Light, | true God of true God; | begotten, not made; | of one essence with the Father; | by whom all things were made; | who for us men and for our salvation, | came down from the heavens. | And was incarnate of the Holy Spirit (Ghost) | and the Virgin Mary, | and became man. | And was crucified for us | under Pontius Pilate; | and suffered, and was buried; | and arose again on the third day | according to the Scriptures; | and ascended into the heavens, | and sitteth at the right hand of the Father; | and shall come again, with glory, | to judge both the living and the dead; | whose kingdom shall have no end. AND in the Holy Spirit (Ghost), the Lord, | the Giver of life, | who proceedeth from the Father; | who with the Father and the Son together | is worshipped and glorified; | who spake by the prophets. | In One, Holy, Catholic, | and Apostolic Church: | I confess one baptism | for the remission of sins. | I look for the resurrection ✠ of the dead, | and the life of the age to come. | Amen. 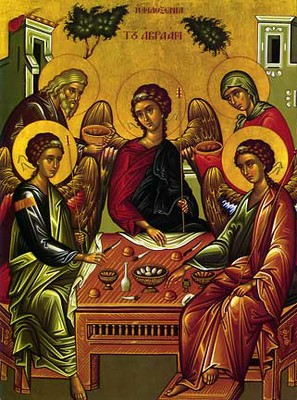 Explanation of the Symbol of Faith

The Church is monotheistic, meaning that there is but one God who is Eternal (Has no beginning and no end), all powerful (omnipotent), all knowing (omniscient), and is everywhere (omnipresent). God made the heavens, the earth and all things both visible and invisible. Within the One Nature of God there are Three distinct Persons: Father, Son, and Holy Spirit. These Three Persons have three distinct roles: The Creator, The Savior, and The Sanctifier. This, we refer to as "The Trinity" or Triune God. The Son of God, became truly man and was always truly God. He was begotten of the Father, but had no beginning and no end. He and the Father are one. God the Holy Spirit infused the divine with the human when Jesus was incarnate by the Holy Spirit and born of the Virgin Mary (The God Bearer). As the God-man he was crucified for our sins, taking all the sins of humanity upon himself, and dying a horrible, excruciatingly painful death. He then defeated Satan (Lucifer, the fallen angel and prince of this world) and restored immortality for mankind by becoming the "firstborn of the dead" and rising body and soul (the resurrection) on the third day after His death. He was seen by the disciples and over 500 people in his risen, glorified body, after His resurrection. Then He ascended into heaven where he now sits as Lord of Lords, and King of Kings, at the right hand of God the Father. The third Person of the divine Godhead is the Holy Spirit (Ghost). The original Nicene creed stated that the Holy Spirit proceeded from only the Father, but the Western Church added what is called the Filioque clause (meaning proceeding from the Father and the Son). This filioque clause (double procession of the Spirit) was rejected by the Eastern Churches and has never been ratified by a truly Ecumenical council since the Eastern, Roman, and Anglican Churches are not in communion with each other. The Holy Spirit is presently operative in the Church. He was promised by Jesus before He ascended into heaven, and has empowered the Church since the day of Pentecost. The Father, Son, and Holy Spirit together is worshiped as the One and Only God that has been spoken of by the prophets of the Old Testament. The Church is catholic (universal) and Apostolic (descends from the original apostles). We believe that this Apostolicity passes in an unbroken chain from the Apostles to the present day through the Episcopacy (Bishops). The Church believes and teaches that to be saved one must have faith, repent of any sin actual sin committed, and be Baptised in the Name of the Father and of the Son and of the Holy Spirit for the remission of sin and restoration of man into the Mystical Body of Christ. Baptism is a sacrament whereby the outward sign of water represents the inner spiritual grace of regeneration. We believe that every human who has died (mortality) will be raised to new life unto immortality by the Resurrection of Jesus Christ who defeated the power of death once and for all. We believe in the second coming of Jesus Christ at the end of time to judge both those alive at that time and those who have died in all ages past. Jesus will usher in a New Heaven and New Earth. Satan and all the fallen angels who followed him, as well as those who have rejected the Salvific work of Jesus and been unrepented of their sins, will be cast into the "lake of fire". Those who are "in Christ" will be welcomed into everlasting bliss with God. This is the summary of faith of the one Holy Catholic Church.